Last month, the good folk of Lives Not Knives and a few of us local technology specialists got together to host an event for London Technology Week. Our theme was upcycling cardboard. Mick Rideout and I created a workshop where attendees could add their own faces into a virtual reality zombie game running on the Google Cardboard virtual reality glasses.

Our project was called Cardboard Zombies and used the Unity Engine along with the Google Cardboard SDK to produce an Android application. The source to the project is available on my GitHub if anyone would like to build the project for themselves.

As our theme was cardboard, I decided to make my virtual zombies look like they were made from cardboard boxes. It was then relatively easy to paste an image of attendees faces to a polygon attached to the zombie’s face. 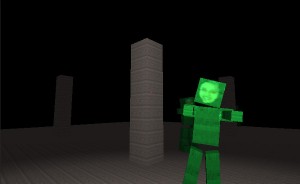 In the workshop itself, Mick photographed the attendees faces and we gave them each instructions on how to use the Gimp image editing software to prepare their images for use in the game.

The process was first to paint in any effects they might like, such as blood red eyes or scars and the like. Then cut away parts of the image surrounding their face. Finally we had them reduce their images to 32 by 32 pixels to make them comparable to the sizes of other image assets in the game. (This also keeps the download file size of the final product small.)

On the day everything went fairly smoothly. The workshop was quite popular throughout the day. And we had a good number of attendees learn to use the photo manipulation tools and create zombie faces for our game. They also had a lot of fun seeing themselves as virtual reality zombies.

I hope to get around to releasing the app on the Google Play store soon. Stay tuned!

This site uses Akismet to reduce spam. Learn how your comment data is processed.